I am a fifth year graduate student and NSF Graduate Research Fellow in astronomy at the University of Texas at Austin. I work with Prof. Adam Kraus to study the properties of young star-forming regions and binary star planet hosts. I am particularly interested in improving our understanding of star formation using simulations, and in understanding the impact of multiplicity on star and planet formation and evolution. Papers I have either first- or co-authored can be found here.

My CV can be found here. I can be contacted at kendallsullivan (at) utexas (dot) edu.

I work on a variety of projects related to young stellar populations and planet hosts. My star formation interests include using simulations to improve the methods used to derive population-wide statistics in star-forming regions, and working to better understand the relationships between accretion, disk properties, and star formation. My planetary demographics work is primarily focused on understanding the impact of stellar multiplicity on planet formation and evolution. 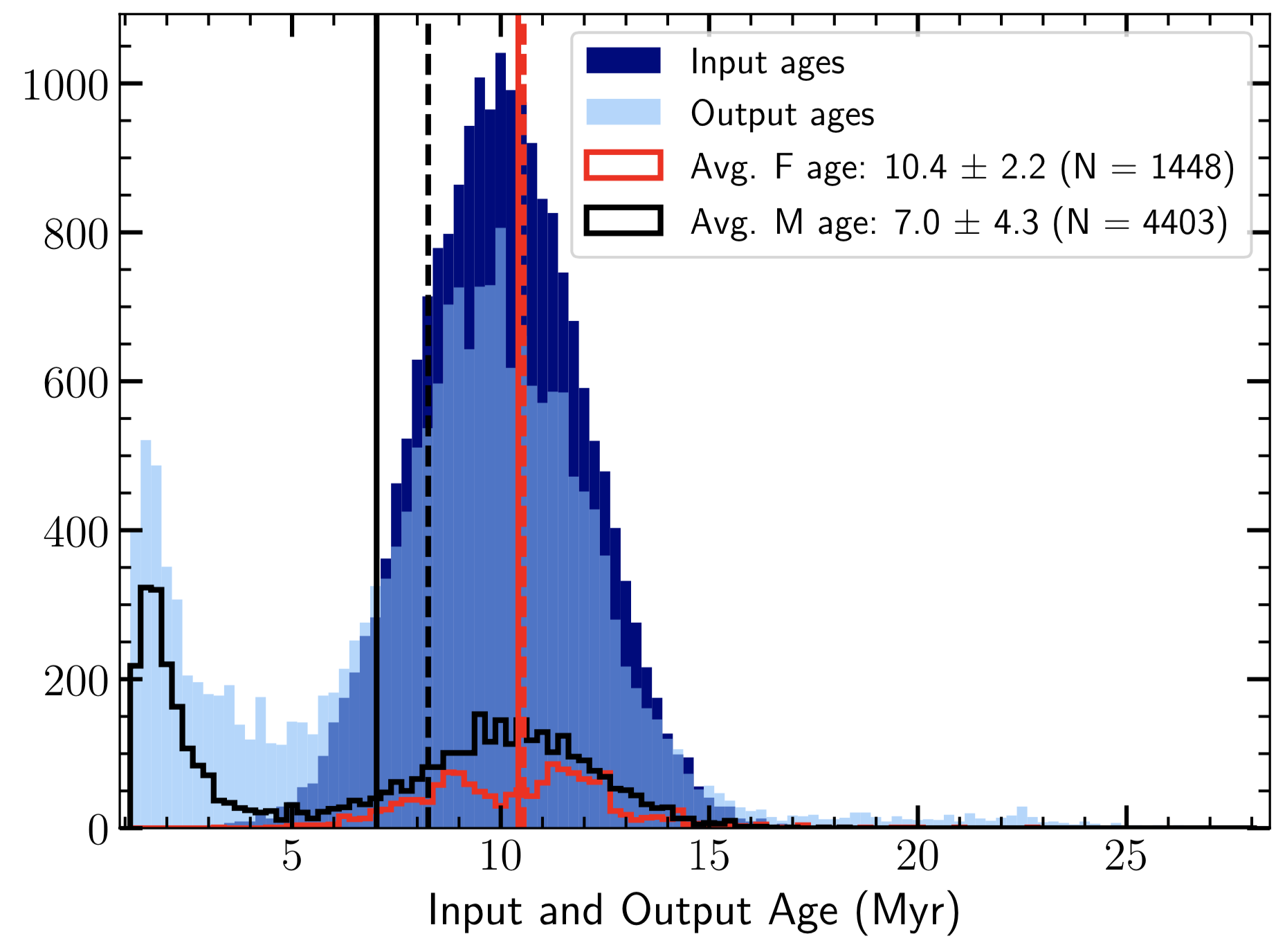 One way binary stars impact population statistics is by appearing younger than they truly are. (Sullivan + Kraus 2021) 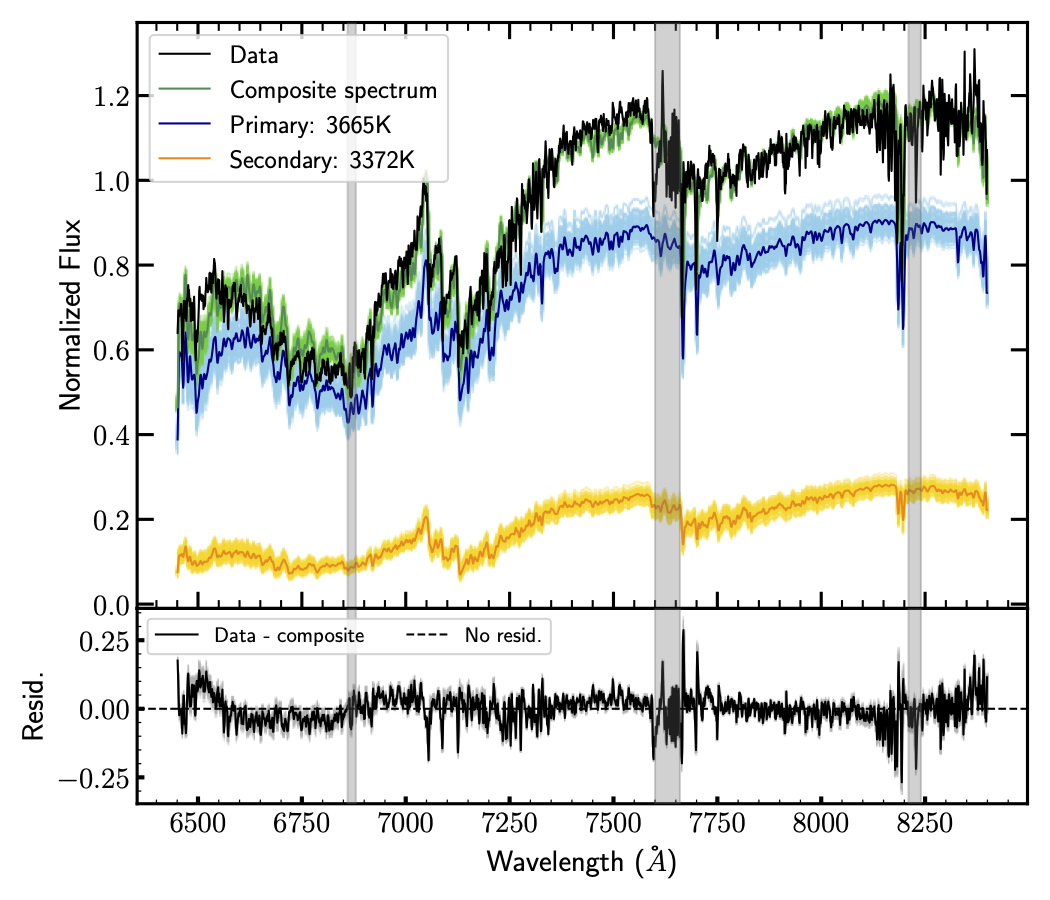 An unresolved, spectrum of a binary can be accurately deconvolved into two components with well-constrained values using a Monte Carlo algorithm (Sullivan, Kraus, and Mann 2022).

Multiplicity affects a planetary system's environment. For example, close multiplicity (separations less than 50 AU) reduces the planet occurrence rate in Kepler planets by a factor of 3, but the physical process causing this effect is not known. One complicating factor in understanding the mechanisms governing planet survival in binary stars is difficulty accurately characterizing the components of close binary stars. Although small numbers planet-hosting binary systems have been analyzed in detail, a more efficient methodology is necessary for developing a statistically robust sample of planet-hosting binaries with accurate properties.

I developed a technique to retrieve the properties of spectroscopically-unresolved binary stars and am applying it to a variety of samples of planet-hosting binary stars from the Kepler mission. I began by analyzing archival data (Sullivan, Kraus, and Mann 2022), and have ongoing observational programs at the Hobby-Eberly Telescope at McDonald Observatory to collect data on a larger sample of Kepler binary star planet hosts. My most recent published work found that most supposed super-Earths in binaries are actually sub-Neptunes (Sullivan and Kraus 2022b). 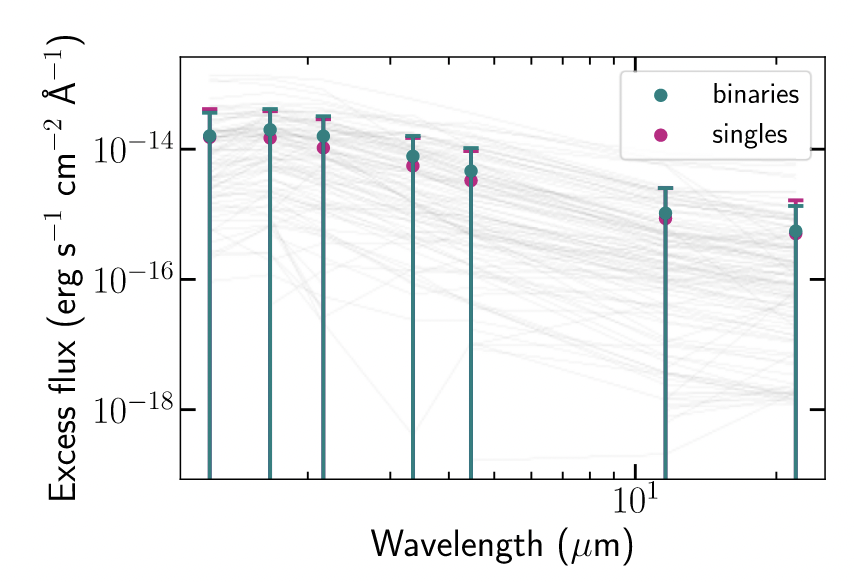 Spectral energy distributions of binary and single star dust disk excesses from an analysis of archival data (Sullivan + Kraus 2022a). Single and binary stars have similar SEDs, indicating that the inner disk structure is unaffected by multiplicity.

Young stars host circumstellar disks comprised of gas that is accreting onto their surfaces and dust that is forming planets or being burned up at the inner edge of the disk. These violent processes produce myriad distinctive observational signatures, but the connections between star and disk evolution and the role of accretion in disk dispersal remain unclear even after decades of work. I am interested in using both large population studies and in-depth studies of individual stellar systems to understand the role that accretion plays in disk dispersal and stellar evolution. My most recent work on the topic has found that the inner disks of binary and single stars are extremely similar, although the sample was not adequate to separate out close binary stars, where the impact of stellar multiplicity on the inner disk properties should be most pronounced.

I received a B.S. in physics and astronomy from the University of Massachusetts, Amherst. While at UMass I studied blue compact dwarf galaxies and the magnetic fields of spiral galaxies, before beginning to work on young binary stars during an REU at Lowell Observatory in Flagstaff AZ. After graduating, I worked at Lowell for another six months before moving to Austin for grad school.

Beyond research, I have been involved in outreach and mentoring within astronomy since undergrad. I was the diversity officer and then the president of the UMass Astronomy Club, and the co-director of the Orchard Hill Observatory, which is a student-run observatory on the UMass campus that opens for the public weekly. I also mentored junior undergraduates. At Texas, I have been a near-peer mentor for several undergraduates. In the summer, I run an Introduction to Astronomy Jargon lecture series for TAURUS + REU students, and have also assisted with an introductory Python workshop run by another graduate student. I also co-lead the Graduate-Undergraduate Mentoring in Astronomy program for the department. Outside of work, I like reading escapist sci-fi, finding new things to cook, and doing pretty much any form of exercise except for running.

I successfully applied for the National Science Foundation Graduate Research Fellowship Program in the 2019-2020 academic year. I'm more than happy to discuss my application and help out future applicants. My personal statement is here and my research statement is here.